It was a dark and stormy night….

No, it actually wasn’t. It was an overcast, cool, windy day in the “shoulder season” (before or after the summer season on San Juan Island) and the Orca whales had not been seen or heard anywhere. I tried not to be disappointed. Being out on Maya’s awesome J1, a Zodiac boat with an enclosed cabin and head (that’s “boat” for “toilet”), zipping by lighthouses and seeing some sea lions would be fun too.

There are many whale watch outfitters offering tours from Friday Harbor and San Juan Island and deciding on a tour can seem overwhelming. I have gone whale watching from the isle for over a decade and can assure you, there is no whale watch tour operator I wouldn't highly recommend. There are a couple of things though, which distinguish Maya’s Legacy Whale Watching from all others: Maya’s goes out year-round, not just between April and September, and their super-fast Zodiac can take you further than many other boats, without being chilly and uncomfortable.

My photographer hubby and I checked in at Maya’s Friday Harbor office, conveniently located next to the San Juan Coffee Company (best home-made truffles in town) on the Cannery Landing right next to the ferry dock. Captain Spencer and naturalists, April and Jeff, introduced us to the three couples we were going out with and walked us to J1, named in honor of the iconic Resident Killer Whale Ruffles. J1 (the boat, in this case) is really cool. The seats are comfortable, like on a luxury train, with 360-degree views. No need for extra clothing even on a chilly day, due to the enclosed cabin, as well as spacious viewing decks on both stern and bow. Though we do recommend bringing a jacket so you can stand outside as well.

Without relatively little ado, we headed south to Whale Rocks, where we saw, heard and smelled (in that order) some enormous Steller sea lions, as well as a few younguns, which are rarely seen.

That’s when Capt. Spencer got word that there were Transient whales way out in the Straits in Canada, almost to the open ocean. He looked at us and said we could make it, if we were all willing and none of us had to be back ashore by a certain time. “Are we up to it?” None of us hesitated. We were a go!

We sat back and Capt. Spencer showed us what J1 is capable of. At exhilarating speed we left the San Juan's behind, flew by Victoria, British Columbia and headed towards, well, Japan really. We could sense the strong currents of the open ocean tug on our boat. It felt freeing to be out of the country and going so fast.

We spent the ride chatting with April and Jeff about the challenges the Orcas currently face. The Resident Killer Whales, largely subsiding on a diet of King Salmon, are due to a lack of fish starving and not reproducing. The Transients on the other hand, living on abundantly available seals and sea lions, are experiencing a growth rate of 10% per year and are doing fantastic.

Then suddenly we saw them:  Orcas. Three matrilines present and socializing. We were in awe. April quickly identified the Black Fish for us. This looked like a playdate for the youngsters with some big uncles thrown in for good measure. 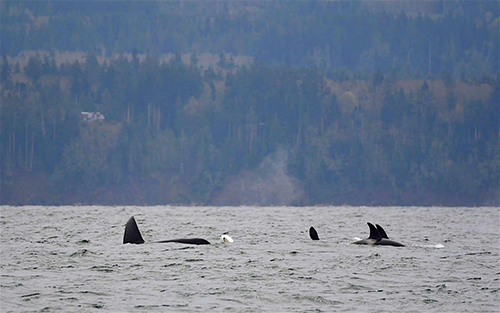 T099s, an unidentified on its side (pectoral fin and tail fluke in the air), followed by 23-year old T019B

They were tail slapping, rolling, spy hopping and even launching themselves around each other. And according to April, this is a rare occurrence and one we were very lucky to observe.

Look closely and you will see the scarring on T019B’s saddle patch (above). That happens when your food fights back.

We were the only American boat, which saw whales that day. Amazing.

On our way back to Friday Harbor, we cruised past Race Rocks Marine Protected Area in the eastern entrance of the Strait of Juan de Fuca in Canada, to check out more handsome Stellers surrounded by several California sea lions.

Happy and tired, we leaned back in our comfy seats and enjoyed the ride back to town, when Maya’s crew had another surprise. It was the birthday of one of our fellow whale watchers. The crew handed out caramel chocolates to everyone and the birthday girl got a special little gift. What a crew! What a day! We’ll be back soon!